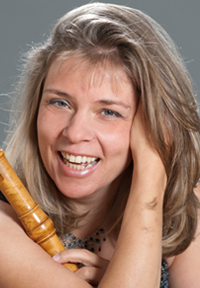 „Maria Loos proves two things simultaneously: tremendous virtuosity and stylistically confident playing of both early and twentieth century classical music. Runs and flourishes in Vivaldi sparkle like effervescent spring water with astonishing precision and sharpened articulation from sopranino, alto and tenor recorders. Witty agogic and funny flourishes provide varied baroque music, allowing the listener to forget Strawinsky’s verdict that Vivaldi composed a concert 600 times. She colourfully paints the moods of La Notte and portrays the moody chirping of the goldfinch in Il Gardellino with humour. In part she uses Vivaldi’s sheet music only as stimulus for imaginative improvisation – this transforms baroque scores into lively music. Ensemble Prisma, founded in 2004 under the leadership of the violinist Thomas Fheodoroff, accompanies the recorder player in an articulate and lively manner and complements her playing ideally.
These qualities are shown to even clearer advantage in Astor Piazzolla’s tangos. The instruments are played full of nuance and contrast with both abrupt and enticing tones; wild sound and rhythm effects are combined in an atmospheric manner. And Maria Loos tackles the tangos, superbly arranged by the Argentinean José Carli, with passion and temperament and surprising sound effects on the recorder.
The CD received the Austrian broadcasting company’s ‚Pasticcio Prize‘ – an award that the production rightly deserved. Listening to Vivaldi and Piazzolla (in unusual casting) becomes a true pleasure.

„Maria Loos, currently living in Salzburg, celebrated a triumphant success with this home game, which will be hard to surpass. Her pulsating verve in the intoxicating coordination of baroqueplaying patterns and trill figures as well as the great exhalation of the Larghetto movements of Vivaldi’s concerts intrigued the audience. The mixture of virtuos luminance and tonal capacity of this acclaimed recorder player won the audience over.“

„The compelling and overflowing momentum of the musical language was impressive… Recorder player Maria Loos conveyed such moments full of wit and technical brilliance. Alongside furious virtuosity she was even capable of sulking via her instrument.“

„The audience was dazzled by her brilliant performance of Baroque sonatas by women composers with cello and harpsichord, as well as her performances of contemporary compositions for recorder. Her excellent performances as well as her leadership as a prominent professional woman in the field of music education and music performance made a significant impact among the festival’s seventy selected scholars, performers, composers, conductors, educators, and student performers.
Our long-standing festival, featuring the works of women composers by international presenters since 1990, draws upon the highest quality of scholars and performers in this research area. The talents that you shared among our community of artists and scholars most certainly add to an emerging collection of data and performances on the work of women composers.“

„There’s no question about it – Maria Loos playing the historic recorder belongs to the outstanding interpreters of the new generation of dynamic soloists… As always when outstanding artistic personalities become acquainted with and adapt different intonations, styles or ways of playing, an individual technique emerges in the synthesis of controversial conceptions. This is also apparent in Maria Loos. She presented works from the baroque period unique in their brilliance and stringency. Maria Loos cultivates a way of speaking through her music, playing with emphasis and measured rising intonation… She clearly emphasises the rhythmic of the fast movements while articulating the slow movements as widely calculated cantilenas with long structured breathing and softly vibrating freely oscillating intonation. Her triumphant virtuosity cannot be questioned…“

„She operates the flute with heart and soul. It is a pleasure to watch how she moves her body whilst playing. Maria Loos and her recorder dance with the greatest depth – both in breathtakingly fast runs and also with tender lyrical passages in which she holds the quietest note fantastically securely.“

„Above all Maria Loos knows how to use her recorder like a snake-charmer to capture the audience.“

„The audience was taken by storm with the Renaissance recorder’s virtuoso festivities, its lilting and tumbling rhythms and the somersaulting motion of its intonation… The soloist carries you off into a complete recorder paradise… in which she expresses all the joys and sorrows of this world alongside unhesitating high spirits in breathtakingly fast and effervescently articulated movements.“

„The recorder breathed, dabbed at its notes, sparkled through its runs… Recorder soloist Maria Loos‘ playing was breathtaking – a brief caesura and the last note was dabbed on like a full stop.“

„The ensemble’s sound was captivating with its filigree vocal weave under the leadership of virtuoso oscillating tones from the recorder… Maria Loos‘ solo virtuoso recorder tones stood out with their enchantingly sweet melody.“

„By duetting with the vocal part Maria Loos showed a capacity for understanding and the ability to listen exactly. She cast a colourful spell over her listeners with fine dynamic shading and a phenomenally clean intonation. She played enchantingly with precision, a highly imaginative ability to ‚decorate‘ the music and a dazzling wind instrument technique. Handel’s sonatas appeared fresh, as though they had just sprung from the composer’s quill.“

„Anna Amalia, Princess of Prussia wrote a sonata for Flauto dolce and B.C. which is highly virtuoso music yet extremely rich in content. Maria Loos demanded everything from her soprano recorder. She remained completely relaxed however; playing the recorder and her air of merriment seem to be her specific expressions of life. The way she and the cellist observed one another secretly before the entry into the allegro was worth seeing.“

„Viola da gamba and the lute accompanied and accentuated the recorder player Maria Loos‘ skillful caprioles with their playing… The audience allowed itself to be carried away by the at times melancholic, then merry once again, almost lively and refreshingly performed melodies of the composers. Today it is almost unimaginable that the recorder was once not only an instrument but a status symbol in England. A lady now plays it and does so with elegance and perfect harmony. The trio of musicians received much applause for this sophisticated concert.“

„The sonata’s slow runs were successful – expressive, not least in the floating and intense recorder playing… The dance-like effects and above all the fast final run made a huge impact.“

„Maria Loos offered a highlight from completely different times, namely contemporary modern, with ‚12.5.83‘ by Drake Mabry. Impressive how the recorder player achieved the sequences of notes with abrupt changes in tempo, tones to the point of disharmony and pitches that go from warm to icy cold, soft and hard.“

„The trio offered historic music that was a pure treat for the ears, a real pleasure to listen to. This was the result of the instrumentalists‘ enthusiasm. Flautist Maria Loos‘ playing is expressive and full of fresh nuances, constantly cultivated and lively…“

„Recorder expert Maria Loos introduced herself with a trio sonata by Anna Bon di Venezia. The first movement was an adagio that led the audience to expect a church sonata; it also seemed spiritualized and solemn. Both allegro movements with their increasing virtuosity made people sit up and take notice. The flowing breathing technique that radiated enthusiasm and festiveness was to be admired…“

„Maria Loos shone with excellent technique and a keen sense for sound with the sopranino recorder in three runs of the Vivaldi concert. The notes from her performance hung in the air; this combined with perfect timing were discreetly accompanied by the orchestra…“