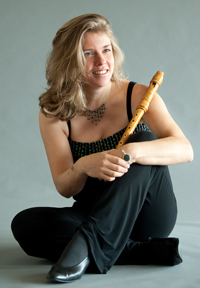 Maria Loos is internationally in demand as an interpreter of Early and Contemporary music.

She presents herself as an outstanding artistic personality who impresses the audience and the press with her spirited playing, her triumphant virtuosity and her feeling for remarkable sound refinement.

She received the Pasticcio Prize 2010 for her CD Piazzolla/Vivaldi.

Since 2006 she has been invited to concerts and master courses in South America and Florida.
In 2008 she was artist in residence at the IUP Festival in Pennsylvania/U.S.A.

With her ensembles Spirit of Musicke and Musica Thalia she drew attention to herself with remarkable programme planning in concert series and festivals of Early Music.

Beside the intensive involvement in Early music she works closely together with composers of Contemporary Music such as Drake Mabry, Anna Rubin and José Carli and has been the first to perform works from them.

She has taken part in CD and radio recordings and is a lecturer for international courses.

From 2020/2021 she will have a teaching position at the Mozarteum Salzburg.

Maria Loos studied the recorder at the Mozarteum and at the College for Music in Leipzig (Robert Ehrlich). She completed her studies in master classes with Han Tol, Karel van Steenhoven, Dorothee Oberlinger, Gerd Luenenbuerger and Carin van Heerden.
She passed her graduation recital with distinction.